Joseph and I married on June 18 in a non-traditional interfaith ceremony, reflecting our roots in indigenous Polynesian and Native American traditions. The wedding was held outdoors, under a pine and flower arbor, on a hill overlooking the beautiful grounds of the Ndakinna Education Center in Greenfield Center, New York. The ceremony began with “the words spoken before all others,” the Thanksgiving greeting giving thanks and acknowledgment to all Creation offered by Mohawk elder Tom Porter Sakokwenionkwas, followed by a shamanic calling in of the spirits and introduction of the grandmothers by Shari Parslow. The grandmothers were represented by my mother, Lovika De Koninck, my aunts Anne-Marie Coad and Moira West, Mohawk storyteller Kay Olan, and my friend and colleague Julia Penn Shaw. 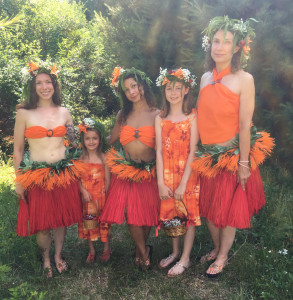 Bridesmaids and Flower Girls Before the Ceremony

Joseph, his sons Jim and Jesse, and grandson Jacob sang the Abenaki greeting song after the opening address. They wore matching traditional ribbon shirts in black, green and red, beautifully crafted by the talented Joanne Mason. Reretava Tahitian dancers Joanne Mason, Whitney Luedtke and Naima Burnett, wearing spectacular orange and red costumes with flower crowns, followed with a traditional Tahitian drum dance, Vahine Tahiti, with music by my son Mikaël Mulholland. Mikaël also composed the original song for my entrance dance, which preceded the formal part of the ceremony, and joined me under the arbor to give me away. 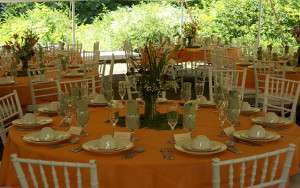 Ready for the Feast.

Our vows were administered by our dear friends Joseph Kulin, a Quaker elder, and Pierre Zimmerman, an ordained Buddhist chaplain. My sister Kareva Mateata Allain joined us under the arbor to wrap us in a stunning star quilt (from the Standing Rock Lakota Sioux Reservation in North Dakota) to symbolize our bonding. As the closing of the ceremony, Mikaël Mulholland and Joy MacKenzie sang the traditional Tahitian song Bora Bora as the dancers and I performed an ‘aparima – a storytelling dance. Joseph’s lovely granddaughters Carolyn and Ava Rae led the procession after the ceremony, and we all walked down the aisle together, we the bride and groom, with our 3 sons, grandson, granddaughters, and close family friends. That was my favorite moment of the ceremony.

Our friends from Sushi Thai Garden catered a fabulous feast featuring Polynesian, Japanese and Southeast Asian foods. Local singer/songwriters Bob Warren and Joy MacKenzie provided entertainment after the meal. The Friday before, we enjoyed a wedding rehearsal dinner at the lovely Forno Bistro in downtown Saratoga, balanced by an after-wedding family brunch at the spectacular Gideon Putnam hotel in the SPA State Park. Joseph and I then headed to Canada for a lovely honeymoon in Montreal, Quebec City, and Rivière-du-Loup.

Tweet
This entry was posted in Uncategorized and tagged marriage, Ndakinna, nuptials, Wedding. Bookmark the permalink.